On Ladybones Road is a bookshop, but a bookshop with its name long scratched out. The owner? A small weepy man. The small weepy man that is with many regrets currently Soulless, and with it gone he took the name from his shop. Still can make a good cup of tea though...if it wasn't so salty. Tears really aren't a good flavouring for tea. Rooms above a Bookshop: rooms on three levels above a winding, dusty stair. The owner is melancholy and given to buttonholing you at the door and weeping into your hat. But he does have some interesting customers.


His tenant on the top floor is an L.S. Cassius. An efficacious and potent detective of rather slight stature. On the third story they have set-up an office. A rather respectable office. The waiting area is mostly furnished, but still has space saved off in one corner for a possible surprise piano some day. There is a hatstand, a small piano, a round coffee table, a cheery stone aspidistra, a well-built leather chaise longue, a grandfather clock, two stripy armchairs, and another smaller round side-table with a small bowl of nuts or candy on it.

Then through the 2nd door one may find a small stove with kettle, three filing cabinets, three decent chairs, and a desk that is large, sturdy, respectable, and just maybe; nicely weight-baring.--(I'm picturing something in a heavy dark wood, with engraving of flowers on its legs, maybe with the centres painted a cheery yellow). A blackboard/easel, a small lockable liqueur cabinet, and a bookcase that covers most of one wall.

On the wall facing the desk is a large, framed oil painting by

nathan_attford (the actual quote from Twitter follows): "the painting is, in colours brighter than natural to make up for the dimness of 'Neath lighting, a peahen with several chicks pecking about on the ground while a peacock looks on in the background, all under a blue sky with trees and grass" Sitting on the desk is a small, midnight-blue, bat-shaped bowl full of tiny paper flowers, and a glass apple. 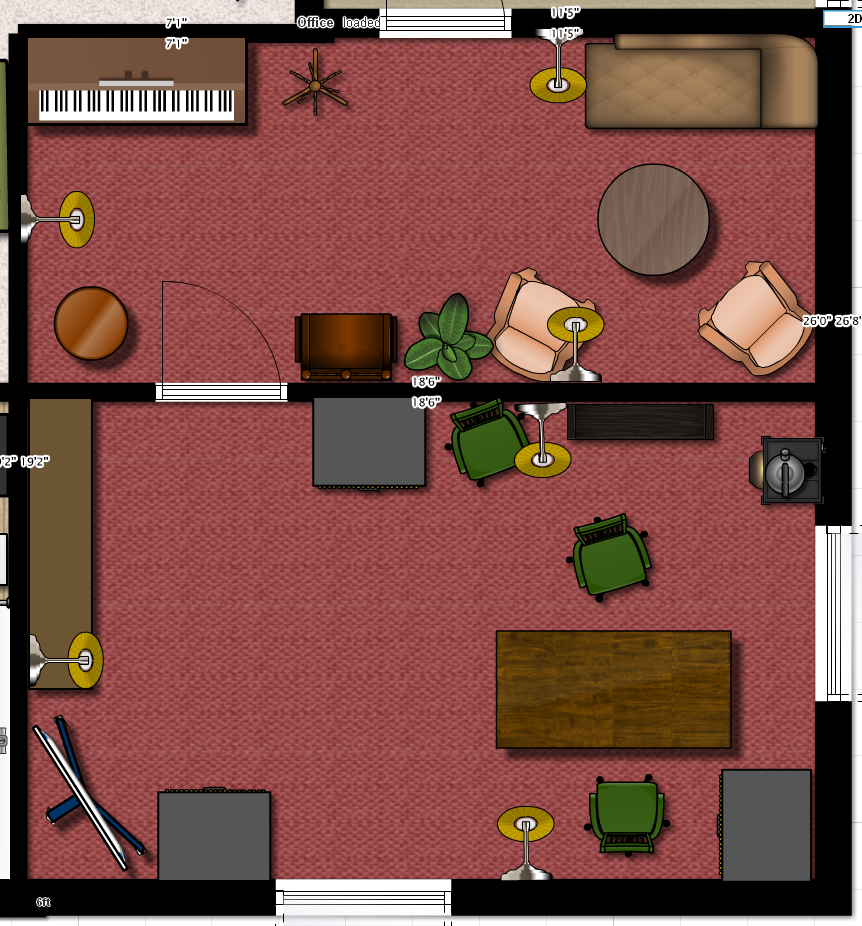 [There are also other rooms that I will do another post for at a later date!] [A reminder that I have a Tumblr for Lorel that is always open for GOOD interaction. The same with @LS_Cassius on Twitter.] 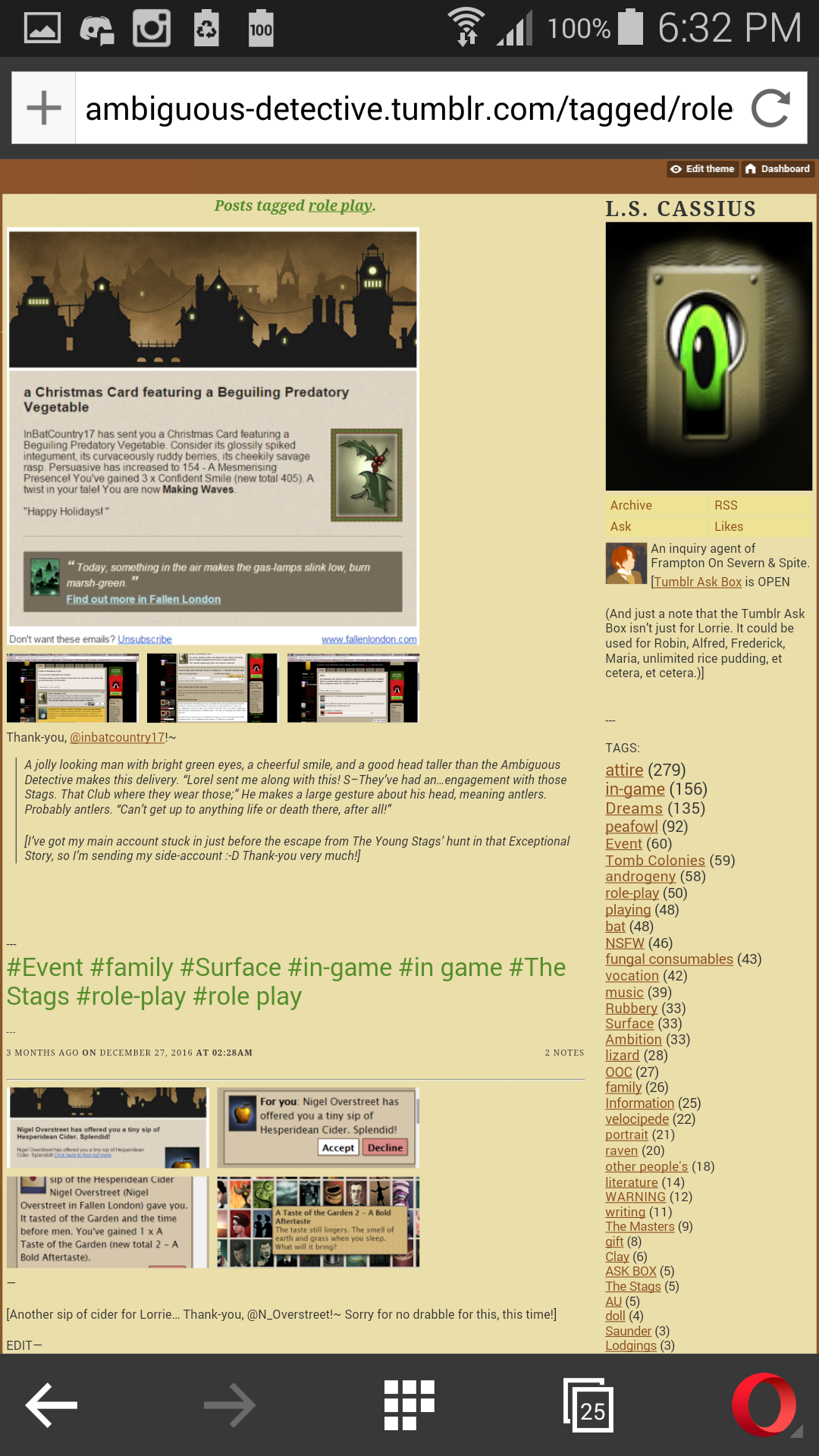 [I am unlikely to move to DreamWidth, or more so join the moved Community for archival purposes (to have access to my old Community Locked posts. Not to participate.). I think long ago I did make a DreamWidth account though so it's there.

So unless invited, the fear of aggression and such of even joining/moving for archival purposes is too much regardless of the first factor.]

n_overstreet for the surprise of offering Lorrie Hesperidean Cider! An AU in if Lorel had come back. Screenshots on {{Tumblr}}.]

Nigel Overstreet has offered you a tiny sip of Hesperidean Cider. Splendid!

A Taste of the Garden 1 - A Meagre Aftertaste The taste still lingers. The smell of earth and grass when you sleep. What will it bring?

@LS_Cassius Accept at your leisure, Ellis. And there is plenty more where that came from!

Cassius sits, no longer Lorel, no longer as pavonine as before. Everything aches in this dreadful, damp place, but it is only flesh & bone. Sinews & organs held onto her slight frame. The invitation surprised her, a welcome surprise of many that weren't. This silly fop, this client that took off before his ridiculous quest's completion, she never expected to see him again. She frowns slightly as she lifts the glass. Before…before she would have been adverse to drinking the fabled Hesperidean Cider. Even though the claims of it were most likely false, immortality was nothing to risk. She'd seen paths it could lead to, where bodies would be hard-pressed to any longer be called human. Rotting corpses, exposed skeletons, only their spirit continuing to animate them. She wouldn't really call it "living". Before she considered that no kind of life for herself, but now she may as well be. Her own will being what continues her on, the duty she still had to complete. Murdering Scathewick was going to be marvellous. And that pledge, and that wish is what animates her own broken body. At least it isn't Venderbight's screecher wards.

It took awhile to process he was referring to her as "Ellis", the name processing over-and-over in her head. She hadn't heard it in so long, and the ridiculousness brings amusement which flickers in her eyes. With a smile resting on the edge of the glass, she inhales--it smells more of orchards in sunshine than any sort of alcohol. Memories of a home she can never return to again until she is truly, truly dead. Her only ever home. It is nice sitting here, and now all this time later she knows the why of Red Honey, the physical thirst to feel memories such as this home smelling cider. Before the nostalgia can turn to regrets she shoots the drink back. Letting all feeling go to the experience. 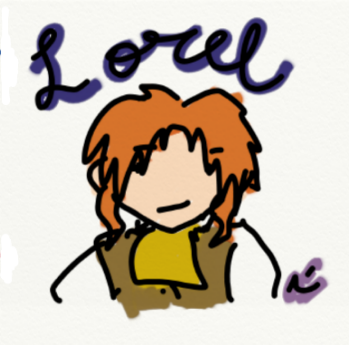 [Drawn with my finger in Draw for kids, coloured with ArtRage for Android.]

[Ashley commented on a post I shared on Facebook about a found "cat snake" (a ferret) that they looked like Knives. I wanted to try drawing it. I tried to capture the annoyance of being on a leash so I tried to add Lydia's pissy face. I went with purple as I think of it for 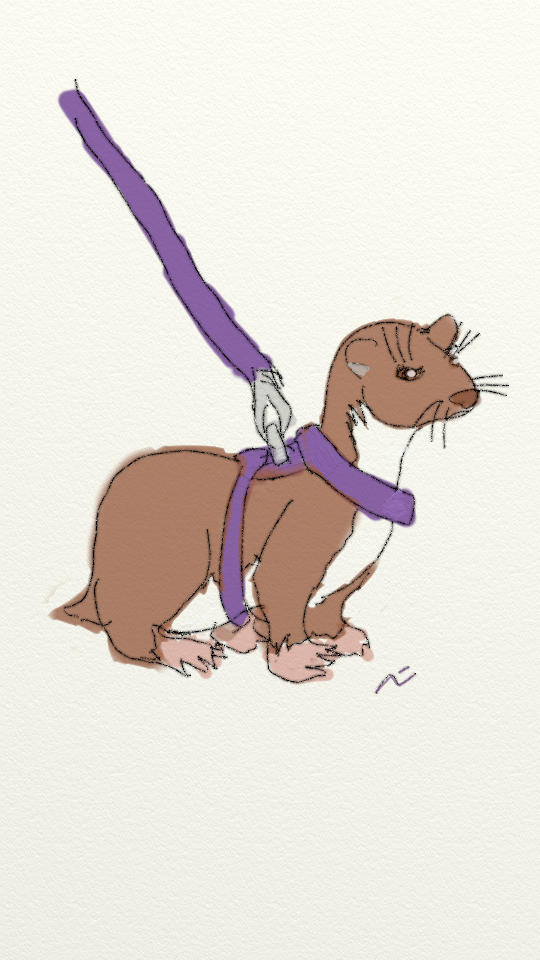